Tie up your dogs and let your goats run wild! 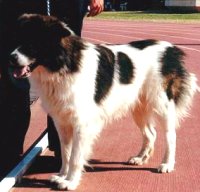 On mainland Greece we noticed many times that there were many places where the sheep or goats were watched very carefully by herd dogs...not the ordinary Sheppard we are used to but very large white and black colored dogs that mingled freely with the sheep or goats.  Greek Sheep dog
We were told that a farmer or goat/sheep herder would count the dogs at the end of the day not the goats or sheep. If there was a dog missing it meant that the dog was guarding a missing sheep or goat. The dog will not leave the goat or sheep alone at night. The dogs are raised with the sheep/goats and protect them staunchly.

But, here on the Island of Crete we have seen a number of large herds of goats just running wild with no person and no dogs guarding them! We wondered about this and then we saw that there were dogs tied up at homes and workshops. So, here on Crete the dogs do not guard the animals but are tied up and the animals run wild. Interesting! We will watch to see if this changes...
Well today we did see more goats and sheep on the road but they were fenced into pastures...but still no dogs guarding them.
We have now learned from a few conversations that the herders let the sheep graze up on the mountains and take their dogs out to bring them in... I guess there are no predators here on Crete (other than humans).
Posted by TravelSpirit at 11:48 AM

Welcome to the world

We welcome fellow travellers, in your hotel rooms, your living rooms, your hostels and campsites...

We hope you will allow us to inspire you to learn more about the world around you and to benefit from the cultures you encounter on your travels or on our blog.

Come live the adventure (called life) with us as we and (hopefully) many others bring to you our stories, our laughter, our insights and our lives as we travel the world over.

My personal goal is to bring one piece of culture in the form of food, to everyone who reads this blog. Through recipes and food related stories I hope you can travel with me to all the places on your wish list. When we eat together we speak together, when we speak together we begin to understand each other as human beings.

TravelSpirit
British Columbia, Canada
I have visited over 40 countries in the 35 years I have been travelling and loved every minute of it. Well maybe not every minute but the vast majority of every trip. I have travelled for business and vacations.